What You Need To Know About Pokemon Go

Posted on August 1, 2016 by WindlassCreative 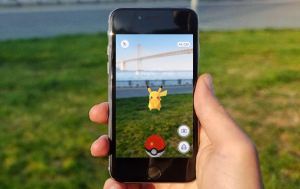 Pokémon Go, a mobile app that allows users to hunt virtually for Pokémon in the real great outdoors, has taken the world by storm, amassing more users than Twitter in just a few days. However, like most cultural phenomena, Pokémon Go has also spawned unintended consequences, such as injuries and property damage resulting from distracted users—fortunately, most of these are covered by insurance.

Even if you don’t know what Pokémon Go is, you’ve probably already seen it in action as there are few places immune from hordes of players scouring the neighborhood, smartphones in hand, hoping to “Catch ‘Em All”, unfortunately some of them are also into signposts, sewer grates and even each other—not to mention even more serious issues.

According to Pokémon creators: “When you see a Pokémon on the map that you want to catch, you don’t have to take another step. That is to say: If you’re sitting at home, and you see a rare monster appear in your neighbor’s yard, you don’t have to hop any fences to get it. Just click it. Same if you see a monster pop up in the middle of traffic or at the bottom of a ravine. Don’t take another step. Along similar lines, if you’re crossing an intersection and you see a Pokémon appear on your phone, it’ll stay put until you get to the other side.

While it is great that people are getting outdoors, it remains important to be aware of your surroundings and be sure you’re adequately protected against risk. Police warn players that the use of GPS technology for the game means users’ location is visible to others, potentially making them vulnerable to muggings or theft, as well as signaling when they are not at home. Across the United States, players have been drawn down dark alleys and into dangerous neighborhoods in search of the imaginary creatures, only to be targeted by criminals. So, even if you fall hard chasing a Charizard, know that you’re covered if you have the right types of insurance, including:

While you’re out and about pursuing those elusive pocket monsters, rest assured that your possessions are covered if thieves break into your home. And, if someone runs off with your mobile phone, you’re in luck if you have cellphone insurance—though it might not reimburse for your lost Pokémon! Also, if you accidentally trample somebody’s flowerbed while hot on the trail of a Bellossome (or a fellow player is injured in your home and decides to sue), most homeowners and renters policies have coverage for damage you cause to other peoples’ property and possessions as well as liability for mishaps on your property.

Hit while running down a Rotom? Depending on who’s at fault (and local statutes), you may be able to file a claim against the driver’s auto liability insurance policy. Almost all states require that vehicle owners and drivers carry liability insurance to cover personal injuries to third parties. Or your own uninsured/under-insured motorists coverage may pick up the tab if not.

Sure, the game’s called Pokémon Go but it’s really your data that’s in play. If thieves make off with your information, many insurers will cover identity theft, either as part of a homeowners or renters policy or as a stand-alone policy. Identity theft insurance reimburses victims for the cost of restoring their identity and repairing credit reports and related expenses.

Pokémon-mania has also come to the water and with it, BoatUS, the national boating advocacy, has 2 tips for playing Pokémon Go while boating: